After 24 years of working alongside Utah Food Bank to help feed the estimated 417,000 Utahns who face hunger, Fidelity Investments® has perfected a recipe for success. This year, Utah employees’ Summer Business Food and Fund Drive garnered more than $176,000 in donations, which will help feed more than 150 Utah families for a year.  Harnessing their time, talent and resources, employees used fun activities, team-building endeavors and, yes, a bake sale to raise the impactful proceeds. Starting in 1994, Fidelity’s employees have taken what began as a holiday food drive resulting in 800 pounds of food and turned it into a year-round partnership with incredible impact on an issue important to Utahns.

This year’s “We Think, We Can” drive among almost 1,975 employees statewide encompassed activities such as a chili and cornbread cook-off, a “Pie in the Face” activity, trivia contests and friendly team rivalries. Volunteers moved the drive to summer after finding out that it is often the most critical time of need for many families who depend on school meal programs during the school year.

In addition to their drive commitments during the summer, Fidelity sponsors and provides volunteers for the Mobile School Pantry at Jackson Elementary School, one of the 67 monthly program sites that Utah Food Bank will host during this school year. Chris Wimmer, Fidelity site general manager, said the bond between Fidelity and Utah Food Bank is as important to Fidelity employees as it is to Utah Food Bank: “Our employees genuinely look forward to the Summer Business Food & Fund Drive not only to help our fellow Utahns, but to show other companies that fundraising can be fun and a great team-building activity,” said Wimmer. “At Fidelity, we’re passionate about making a difference in the communities where we live and work. We’re incredibly proud that our long-term relationship with Utah Food Bank has resulted in a real impact on alleviating hunger in Utah. We relish the continued opportunity to help through our sponsorship of Jackson Elementary’s Mobile School Pantry.”

Between the thousands of volunteer hours filled, hundreds of tons of food donated, and more than $1.3 million raised during the course of our remarkable partnership, Fidelity employees have made an immeasurable impact on the 1 in 5 Utah children who are unsure where their next meal is coming from. THANK YOU, FIDELITY! 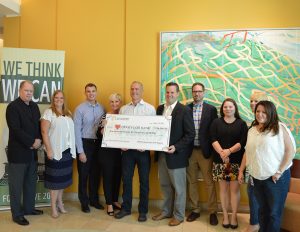